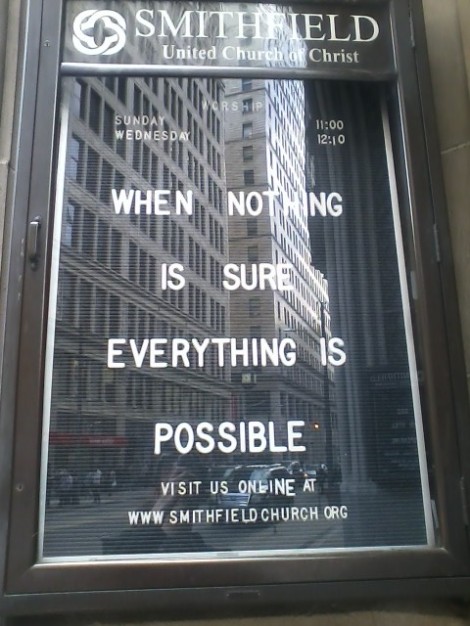 don’t you just love how downtown pgh is reflected in this sign? i do. it’s from a church near the downtown library that occasionally has poignant marquee signs. this one describes, so much, how i feel. nothing at all is sure in my life right now. i don’t know where i’ll be living four months from now, who i’ll be close with, who’ll be answering my phone calls, who’ll be sleeping in my bed. it’s all such a mystery. but that’s ok!

my new goals are to stop being flaky & stop being mean to people who don’t get things right away. i think i am doing fairly well with both of these goals. better with the second than the first. gonna try & find a home for my first book and keep steadily writing the second book. second book’s been hard, because it’s about my life, not just some fantastic little imaginary world that i create and control. second book is going spelunking into the depths of memory, where i don’t really want to go. writing the hard things. writing things that are the exact opposite of how i feel right now, simply because i used to feel them and it’s part of the story. part of the process. and it is making me a better person, even though it’s hard. Because, as my fellow aries and personal hero Dorothy Allison once said, “I know that until I start pushing on my own fears, telling the stories that are hardest for me, writing about exactly the things I am most afraid of and unsure about, I am not writing worth a damn.”

hey dorothy, did you check out our horoscope on free will astrology this week? i think it’s the exact encouragement i need to keep on going with Second Book: Not bad for a few weeks’ work, or play, or whatever it is you want to call this tormented, inspired outburst. Would it be too forward of me to suggest that you’ve gone a long way toward outgrowing the dark fairy tale that had been haunting your dreams for so long? why thank you, will shortz, that is exactly what i needed to hear. it’s not too forward of you at all.

i’ve been wearing gold shorts, wearing miniskirts, wearing tights and cute dresses. i’ve been crying, laughing, adjusting my meds. i’ve been giving people raucous hugs even though it hurts my swollen period boobs terribly. i’ve been drinking again, but only beer, because i simply can’t deal with sobriety right now and hard liquor gets me into too much trouble. (please don’t harass me about this–this is not a decision i made lightly and it’s what i think is right for me now.) i’ve been discovering lots of great new music. full of hope and full of despair in equal measures. trying to take care of myself and trying to take care of other people. making plans. reminding myself to not freak out. doing my yoga and giving thanks for everything, even the hard things, even the impossible things. not sleeping enough. huge dark rings under my eyes. when people ask me “what have you been up to?” i don’t know what to say. don’t know where to begin. inevitably wind up saying something that makes me sound dull. but i’m not dull. just resting. just remembering. where i am and how i got there. rubber stamping messages into my flesh, little reminders: